Hoedown Dance with 5 in the Wheel 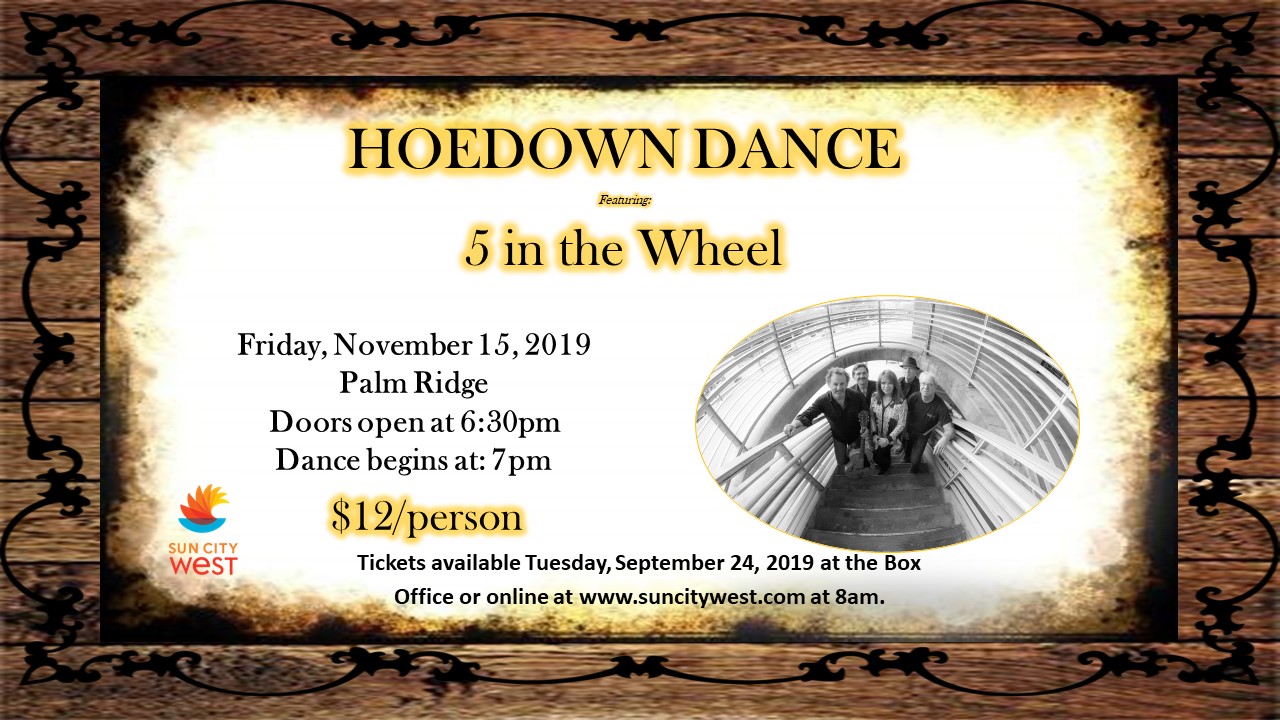 Join the Recreation Centers of Sun City West for good a ol’ fashioned hoedown! Dancing boots and western giddy-up encouranged, but not required. The Hoedown Dance featuring 5 in the Wheel will be at 7 p.m. Friday, Nov. 15, at Palm Ridge Rec Center. Doors open at 6:30 p.m. Tickets for this event are $12 per person and go on sale at 8 a.m. Tuesday, Sept. 24, at the R.H. Johnson Box Office, 19803 N. R.H. Johnson Blvd., or online at suncitywest.com. Non-alcoholic drinks will be available for purchase.

More about the artist – 5 in the Wheel

The name 5 in the Wheel comes from an old gunslinger term for 5 bullets in a revolver. 5 in the Wheel has been together since 2014. Dan and Becky met while playing with a country band called Baker Street. Over a period of a couple months, each of the original band members were replaced to form 5 in the Wheel Band. With Becky being the resident country music fan and Nick having the rock and roll background, the music line up began. Becky and her husband took country dance lessons and began searching for songs that were danceable for Country Swing, Texas Two Step, and even some Waltz songs. Having so many vocalists in the band allows Dan to follow his passion of rich harmonies. Many of the songs selected to play were chosen for the rich harmonies, such as Little Big Town, Lady Antebellum, Journey, Linda Ronstadt, CSNY, and many more. 5 in the Wheel Band plays dance music. They specialize in new Country and Classic Rock providing a little something for everyone in the crowd. While the band has opened for such acts as the Wall Flowers and has had Frank Zappas’ talented sister Candy, join them on stage performing, their greatest pleasure comes from playing for the dancers.