SCW book advisor finds bridge from blindness back to volunteerism 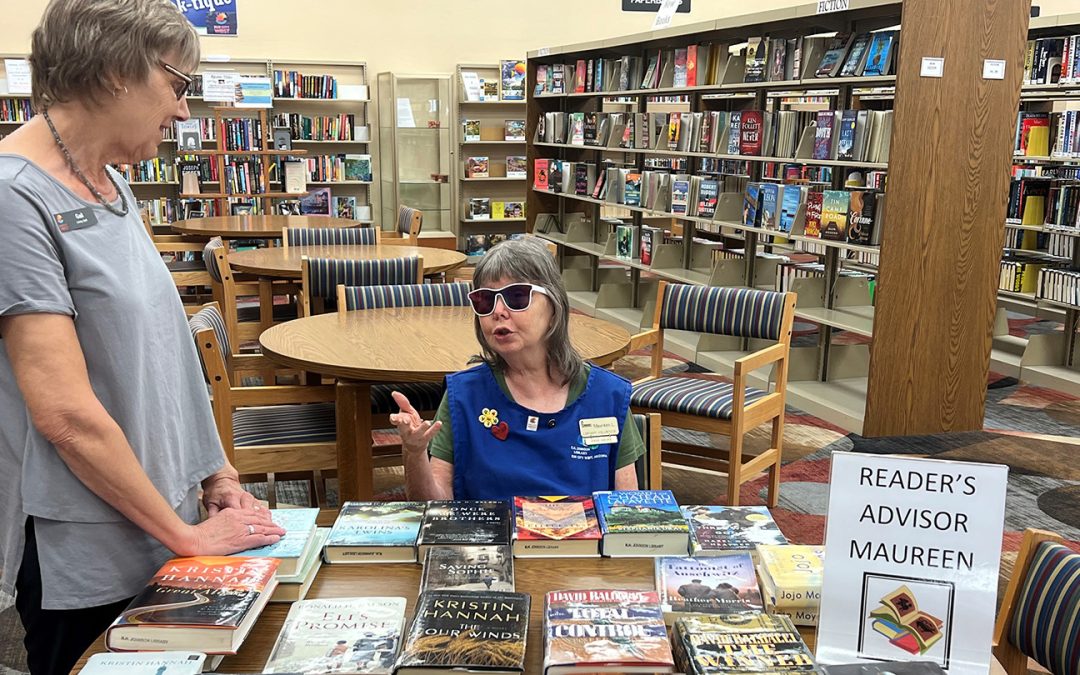 “Can I help you find a good story?” Maureen Legler asks a patron who stops to peruse the books at her table in the R.H. Johnson Library.

Legler is a Reader’s Advisor at the library in Sun City West. She often recommends Stephen King’s “Billy Summers,” gently reassuring the 55-and-older patrons that King’s traditional gore and monsters are absent from this tale of a paid assassin. Most who take her recommendation enjoy the suspenseful story.

“If they like what I recommend, they come back for more,” she says. “I get repeat offenders.”

Patrons will pick up one of the books, intrigued by the cover art or familiar with the author, and ask Legler for more information. “I’ll have to ask them which one they’re holding,” she says.

“If you liked ‘Billy Summers,’ you should read ‘Total Control’ by David Baldacci,” she says, explaining the story about a man who disappears when the plane he was supposed to be on crashes. “The book is here somewhere – you’ll have to find it. Unless someone took it already.”

Legler is a lifelong reader, and her recent loss of sight hasn’t changed that fact.

“My mom used to tell me, ‘Get your nose out of that book!’ So, I’d go outside and sit under a tree and read my book,” she says. 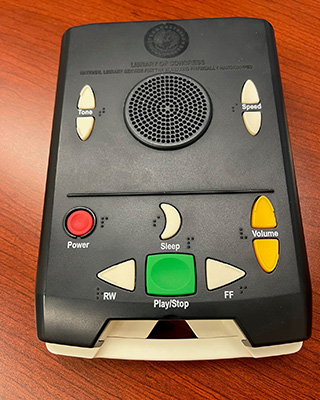 The Library of Congress’s free Talking Book program is designed for the visually impaired, or those who cannot hold or handle a book, or who have reading disabilities. Participants receive easy-to-use devices on which they can plan their books on cassettes. Sun City West members can learn more and receive help registering at the R.H. Johnson Library.

When she lost her sight, she turned to Library Director Tracy Skousen to help her make the leap to books for sight impaired. Skousen connected her with the Arizona Talking Book Library, a program made available by the Library of Congress. The Talking Book Library is not just for those with low vision, but for those who find it difficult to hold or handle a printed book, and those with a reading disability.

“I have been amazed at Legler’s ability to bounce back from difficulties,” Skousen says. “She is an amazing volunteer for the library and after her sight impairment, she came back wanting to know what she could do to continue volunteering in the library and helping others. We worked to get her signed up for Talking Book Library so she can continue to enjoy books. Her attitude about continuing and finding ways to move forward despite challenges is inspiring to see.”

Talking Book Library is a free program that provides the participant with an audio player with shape-specific controls that can be easily identified by touch.

“It’s like a Fischer Price toy so you can navigate around it,” Legler says with her characteristic dry sense of humor.

The R.H. Johnson Library can help other residents get started in the program. “I was surprised to find that librarians qualify to certify blindness for eligibility to sign up for the Talking Book Library,” Skousen says. “It makes the process much easier for those who come to the library wanting to join the program.”

It didn’t take long for Legler to look into Talking Book Library after she lost her sight. She was receiving an IV treatment for the disease that caused her blindness when the monotony of the hourlong infusion took its toll on her active mind.

“I was jealously listening to people around me turning the pages of magazines and I had to just sit there for an hour,” she says. Now she has her audiobooks to take with her.

Legler’s husband, Kevin, goes online to order the books she wants. Talking Book Library can send five or six titles at a time on a single cassette, which she inserts into her player. She listens at her leisure and returns the cassettes for new ones as needed.

Kevin also pulls the titles for Legler’s book selections when she’s volunteering at the library. They’re both adjusting to her new way of life.

“He’s getting to know a lot of the books. He doesn’t usually take my recommendations, but I told him about ‘Billy Summers,’” she says.

Once a month, Legler receives a dose of Actemra, which has long been used to treat rheumatoid arthritis but more recently has been used for what she has – Giant Cell Arteritis (GCA).

GCA is an inflammatory disease that narrows the blood vessels, usually in the scalp, neck and arms. It struck Legler in April.

“I could see blurry on Sunday. I could see shapes on Monday. I couldn’t see a thing on Tuesday,” she says. She speaks as a matter of fact, relaying information but not looking for sympathy.

Legler recalls the blindness was preceded by terrible headaches and jaw pain, which she now knows were symptoms.

Her life has changed a great deal, but she hasn’t.

“We’re all gonna get something,” she says, sitting at her table, her dark sunglasses the only hint that something may be wrong with her eyes. “Sometimes people ask if I had cataract surgery.”

Legler says her hearing is becoming more sensitive and she can usually sense people approaching. She’s also learning to identify regular visitors by their voices. “I don’t want to learn to identify them by their smell,” she says, again with the sense of humor.

Legler’s volunteer nametag boasts 2,400 hours of service at the Library. October will mark six years. She started in the Data Resource Center, and has helped in the donations area, with the Virtual Reality program, and in other departments before settling in as a Reader’s Advisor.

You can find her at her table on Tuesdays (12-3:45 p.m.) and Wednesdays (9-11:45 a.m.) She’s not one to seek attention, and she’ll remind you she’s not the only Reader Advisor at the library. She encourages you to visit all of the volunteer advisors. She just likes to be back in business.

When she lost her sight in April, she was out of commission for less than two months before she told Skousen she was ready to come back. “I had to get MRIs and other tests. Then I was back by May. If it wasn’t May, it was June,” she says.

If you see her, feel free to walk up and say hi. Or introduce yourself. Or ask her about a book. Or ask her what she recommends. But don’t feel sorry for her. No, she doesn’t want that. Just a little prompting so she knows you’re there, then she’ll be happy to talk books with you. She loves receiving book recommendations as well as giving them.

The last book she read? Daniel Silva’s “The Unlikely Spy”.

“I just finished it this morning,” she says.