Event Update: We are canceling the US Army Band Concert on Wednesday, Feb. 23, due to expected inclement weather. The Band was set to perform the “Soundtrack of the American Soldier,” featuring exciting movie music from some of the greatest films of our generation, including “Saving Private Ryan” and “The Great Escape.” The Band is playing tonight, Feb. 22, in Phoenix for those who still wish to see them perform. That show is set to begin at 7 p.m. at the Madison Center for the Arts, 5601 N. 16th St. Phoenix. Call 602-664-7777 for tickets or details.

Sorry for the inconvenience! We had to cancel the US ARMY Band due to weather! We are very sad and upset and look forward having them back next time they tour through!

The Recreation Centers of Sun City West is excited to welcome the U.S. Army Field Band and Soldiers’ Chorus to Beardsley Park for a free concert at 3 p.m. Wednesday, Feb. 23. Gates open at 2 p.m. No tickets are necessary and the concert is open to the public. Partial concessions will be available, including water, soda, popcorn and ice cream. Don’t forget to bring your chairs. This will be a 90-minute concert with no intermission.

The theme for this show is “This We’ll Defend.”

“This We’ll Defend” tells the story of those who answered the call to service. Experience stories from the Greatest Generation and the camaraderie and teamwork that sustains American Soldiers through their most challenging missions. Throughout our nation’s history, the Army has been there to defend the Constitution and the citizens of the United States. With “This We’ll Defend,” The U.S. Army Field Band honors heroes of yesterday, and ensures Americans remember the Soldiers standing guard today in more than 140 countries around the world.

The Concert Band and Soldiers’ Chorus of the U.S. Army Field Band will be performing at this concert.

Learn more about the band 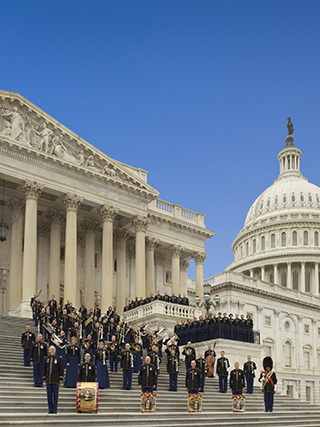 of The U.S. Army Field Band

The Concert Band & Soldiers’ Chorus are the oldest and largest of The U.S. Army Field Band’s
performing components. Founded in 1946 and 1957 respectively, these two ensembles combine to present joint concerts on their national tours. They have performed in all 50 states and 30 foreign countries for audiences totaling hundreds of millions.

The 60-member Concert Band and 29-member Soldiers’ Chorus perform regularly in some of the
most famous concert halls in the world, and just as often in the humblest auditoriums in the smallest of communities. The joining of these two ensembles allows them to offer unparalleled versatility of programming, ranging from orchestral masterworks and operatic arias to Sousa marches, jazz classics, and Broadway musicals. The band and chorus also perform independently, and have recently shared the stage with such ensembles as the Boston Pops, the Cincinnati Pops, the Detroit Symphony Orchestra, and the National Symphony Orchestra.