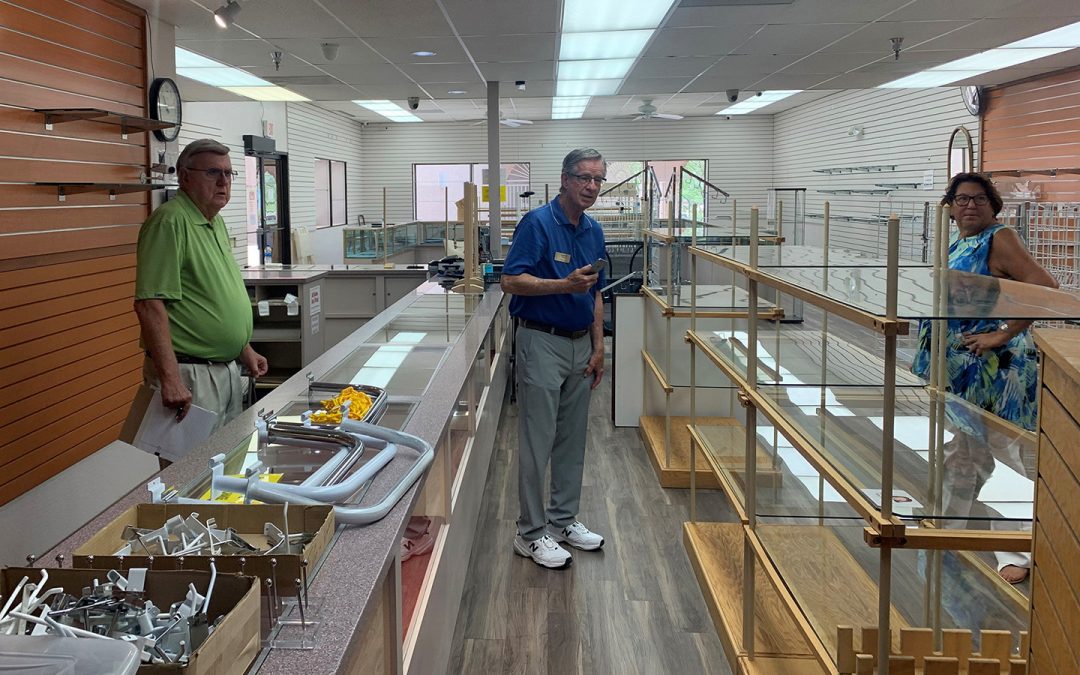 The Rec Centers is happy to announce that solutions have been identified for most of the tax issues related to our 501(c)7 clubs – including the future of the Village Store.

Much of the progress was detailed in the General Manager’s update during the Annual Owner Meeting on June 24. (If you missed the meeting, you can watch it here: https://youtu.be/BY3ze7jlYpY)

Since that meeting, the future of the Village Store has been determined. PORA and its Visitor’s Center will be opening a consignment store, tentatively after Labor Day. The store will deal directly with individual artisans, rather than the clubs themselves – which was the major concern with the Village Store.

IRS regulations for 501(c)7s state: “A social club must be supported by membership fees, dues, and assessments. A section 501(c)(7) organization may receive up to 35 percent of its gross receipts, including investment income, from sources outside of its membership without losing its tax-exempt status. No more than 15 percent of the amount may be derived from use of the club’s facilities or services by the general public or from other activities not furthering social or recreational purposes for members.  If an organization has nonmember income exceeding these limits, all the facts and circumstances will be considered in determining whether the club continues to qualify for exemption .”

Under these guidelines, the “general public” is defined as anyone not a member of that club. In other words, sales to RCSCW members at craft fairs would be considered sales to the public.

Sun City West has 103 chartered clubs, including three 501(c)3s, and the rest classified as 501(c)7s. About 80 percent are operating within their IRS guidelines. A handful were not in compliance with the tax regulations.

Here is what has been done to date to resolve the issues:

RESOLVED: 3 clubs were selling advertising. That is no longer taking place. Any event or facility advertising would be managed through the Association rather than the clubs.

RESOLVED: 16 clubs selling arts and crafts, with outside income above the allowable 15 percent limit. The Village Store, which inadvertently facilitated this problem by consigning items for the clubs, has been closed. Until yesterday, the future of the store was uncertain. However, PORA has since confirmed they will incorporate a consignment store at their Visitors Center. PORA President Ralph Johnson, Director David Hunter and General Manager Tracy McGuire visited the Village Store on Tuesday to look over the display cases and arrangements in anticipation of opening at their location.

The Rec Centers have been removed from all club craft sales with the store’s closure. All sales through PORA would be between the artists and PORA; the clubs should not be involved. Artists interested in consigning should contact Tracy McGuire at tracy.mcguire@porascw.org or call 623-584-4288 ext. 414.

“I just want to offer a huge thanks to PORA for stepping up and helping us find this solution that resolves our issue and provides benefit to both PORA and the artisans,” said General Manager Bill Schwind.

The Rec Centers will offer some kind of fair as we did in the past with the Arts and Crafts Fairs, but again, sales would be from individual artists, with no revenue flowing through the clubs.

Aside from those resolutions, at least two of the chartered craft clubs are considering changing their tax designation to 501(c)3 as they do an abundance of charitable donations involving their crafts skills.

IN PROGRESS: 3 dance clubs taking in outside revenue for guests in excess of the 15 percent. Rec Centers staff will be meeting with these clubs about their options to reduce the outside revenue or change their club status.

IN PROGRESS: Kiva Bridge Club, similar to the dance clubs, bringing in revenue from outside guests in excess of 15 percent. Kiva has been offered the option of dissolving as a chartered club and a 501(c)7, and renting the facility as some other kind of non-tax-exempt entity. The Kiva membership is considering this option.

As the Governing Board is going on hiatus during the summer and most of the club activities slow down, the Rec Centers will continue to work with those individual clubs whose solutions are still in progress, in hopes of having full compliance by Oct. 1.

In response to your questions:
1) Yes, there will be adequate staff.
2) There will be ample space as the “Visitor Center” is being relocated to a different space.
3) Operation hours will not change per the present plan.
4) No, PORA already has some cabinets.
5) The Rec Center doesn’t have personnel required to operate a consignment store currently and needs that space for office operations.
6) The above posted announcement that generated all of these questions IS the Governing Board’s decision.

I appreciate your prompt and responsive answers to my questions. I expected nothing less, and you didn’t disappoint me.

The now former location of the Village Store was in “downtown” SCW. Undoubtedly, the Store sold many SCW club-made craft items to impulse shoppers who, while walking around the RH Johnson Rec. Center for reasons other than shopping, saw an item in the Store display window and entered the Store to make a purchase. Nobody walks to PORA; there will be no impulse shopping there.

Please point out where and how I can obtain the following: (1) Information concerning what efforts, if any, were undertaken by the Board or professional staff to identify locations in SCW, other than the now former Village Store location, to increase space for office operations? (2) The Rec. Center’s agreement with PORA concerning its operation of a Village Consignment Store, including the financial terms of that agreement? .

I am not a tax wizard but.
I assume that artists that wish to sell their wares either thru PORA or directly to the public independent from their Club will provide their own tools, equipment and materials purchased other than through, or provided by a Club?
I also assume that Clubs that purchase materials as a service and convenience to their members will resell such to their membership at a price that totally reimburses all cost of materials and equipment?
I also assume that the Rec Centers will be totally reimbursed from membership that choose to profit from what is intended to be non profit hobby uses of our facilities?

It would seem to make more sense to have PORA take over the Village Store area. There is ample parking and in an area that is more familiar to craft shoppers. It will have more space than what will be at the PORA building. Why not have a meeting with the crafters to kick around ideas? It seem that every change in SCW is decided by a few people so it ends up as a take it or leave it thing.

What about the Fun in the Sun Pickleball tournament that is held each year. Most participants are from outside the club. SCW Pickleball club generates a lot of outside monies from this. How will that be handled?

How does this all square with the General Manger saying in prior meetings that clubs cannot make items to sell to public and they were strictly social clubs.

IF PORA is going to open a craft store, can the items be produced by the crafts person using RCSCW facilities and equipment?

Thanks to the Governing Board for continuing to work on these issues. A big thanks to PORA for being willing to help.

Still lots of questions:
1) how will craft clubs get money for upkeep, equipment, etc, if no income from Village Store sales?
2) will items still need to be inspected and approved before going to consignment?
3) what about limits on numbers of items a consigner can submit at one time? I envision someone taking in 50 items and not leaving space for other crafters’ work.
4) where does PORA have space for this new store? Do they realize how much space this will take, especially if limits are not set on submissions?

The whole purpose of a club is to be a club, not to be an organization for members to make money.
With your current proposal club members are still allowed to use the club facilities to produce
items to make a profit. In the Wood Club, this is going to extremes. Many members are still
producing items for sale like there is no end. The solution would be to eliminate Village Store type
sales and Craft Fairs. Return the clubs to the purpose that they should be. Definition of a CLUB:
a Congregation of Like-Minded People, Unified for the purpose of Brotherhood related to the Purpose.
NOT TO MAKE MONEY FOR INDIVIDUAL CLUB MEMBERS. Of course, your current proposals will promote members to sell items outside of Sun City West Facilities. This is a matter for the club board members to stop. This will probable will probably never happen since the board members are not functioning as board members
at the present time.

There has been mention of allowing outsiders into Sun City West to participate in the clubs and other venues. Also was mentioned that our member dues could be affected which would be unacceptable.

I hope the Board is not considering these options as this would greatly affect the wonderful environment that we have here now. I know many people are upset with these possibilities.