October Movies in the Park 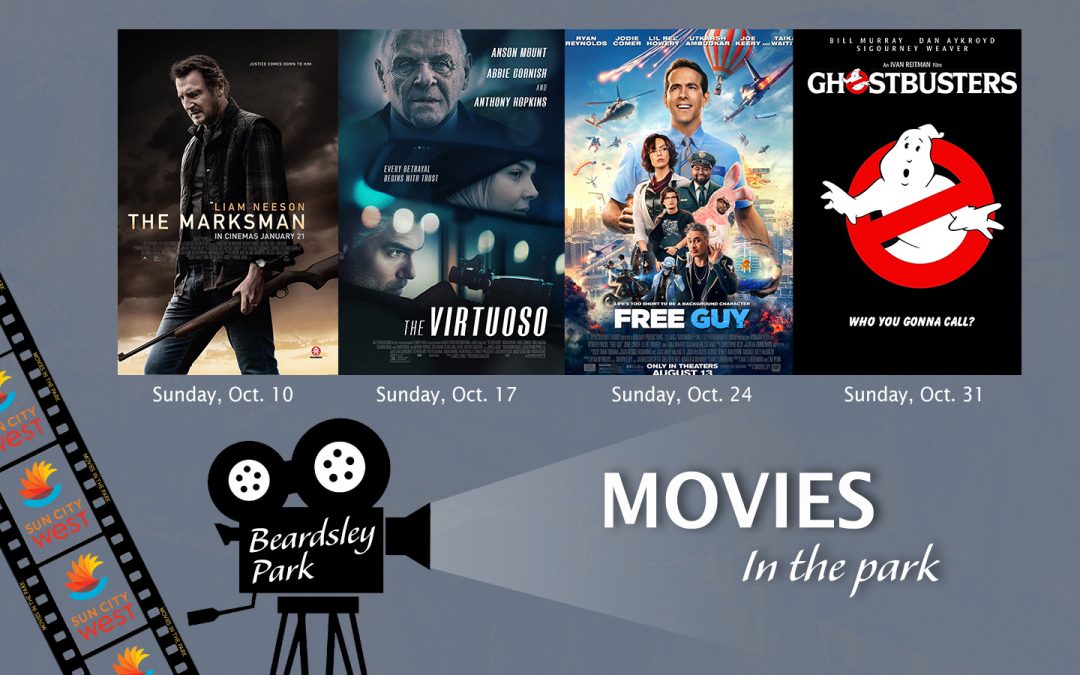 Movies in the Park are back this October! Every Sunday from Oct. 10 through 31, relax in the cool autumn weather at Beardsley Park and spend the night watching a free movie with your fellow Sun City West neighbors. What movies will be showing? Check out the movie lineup down below!

All movies are free for SCW residents to attend. Movie screenings will start at dusk (approximately 7 p.m.). Partial concessions will be available.

Leading a lonely, almost hand-to-mouth existence, Jim Hanson, a financially hard-pressed rancher on the Arizona-Mexico border and decorated former scout sniper for the U.S. Marine Corps, is on the ropes. Still reeling from the loss of a dear one, Jim spends his days with his inseparable companion, Jackson, the sheepdog. Unbeknownst to him that his already complicated life is about to take an unexpected turn. Now, as desperate Rosa entrusts Jim with the life of her young son, Miguel, an inadvertent, all-out war with the brutally violent henchmen of the murderous cartel leader, Mauricio, breaks out. Suddenly, Hanson has one more problem to deal with, and the road to Chicago, where Miguel’s relatives are, is long and fraught with danger. Can the grizzled protector carry out one last mission? Starring Liam Neeson, Katheryn Winnick, and Teresa Ruiz.

Danger, deception, and murder descend upon a sleepy town when a professional assassin accepts a new assignment from his enigmatic boss. Given a cryptic clue, the place and the time, he must identify his mysterious mark among several possible targets. Starring Anthony Hopkins, Abbie Cornish, Anson Mount, and David Morse.

When a bank teller discovers he’s actually a background player in an open-world video game, he decides to become the hero of his own story — one that he can rewrite himself. In a world where there’s no limits, he’s determined to save the day his way before it’s too late, and maybe find a little romance with the coder who conceived him.

Featuring Ryan Reynolds as Guy and Jodie Comer as Millie.

Peter Venkman, Ray Stantz and Egon Spengler work at Columbia University, where they delve into the paranormal and fiddle with many unethical experiment on their students. As they are kicked out of the university, they really understand the paranormal and go into business for themselves. Under the new snazzy business name of “Ghostbusters” and living in the old firehouse building where they work, they are called to rid New York City of paranormal phenomenon at everyone’s whim – for a price. They make national press as the media reports the Ghostbusters are the cause of it all. Thrown in jail by the EPA, the mayor takes a chance and calls on them to help save the city. Unbeknownst to all, a long dead Gozer worshiper (Evo Shandor) erected a downtown apartment building which is the cause of all the paranormal activity. They find out the building could resurrect the ancient Hittite god, Gozer, and bring an end to all of humanity. Who are you gonna call to stop this terrible world-ending menace? Starring Bill Murray, Dan Aykroyd, Harold Ramis, Sigourney Weaver, Ernie Hudson, and Rick Moranis.

In years past the October concerts also used to be free, but now we have to buy $5.00 tickets. What happened to cause this change? I thought that’s one of the events our annual Rec Assn fees covered.