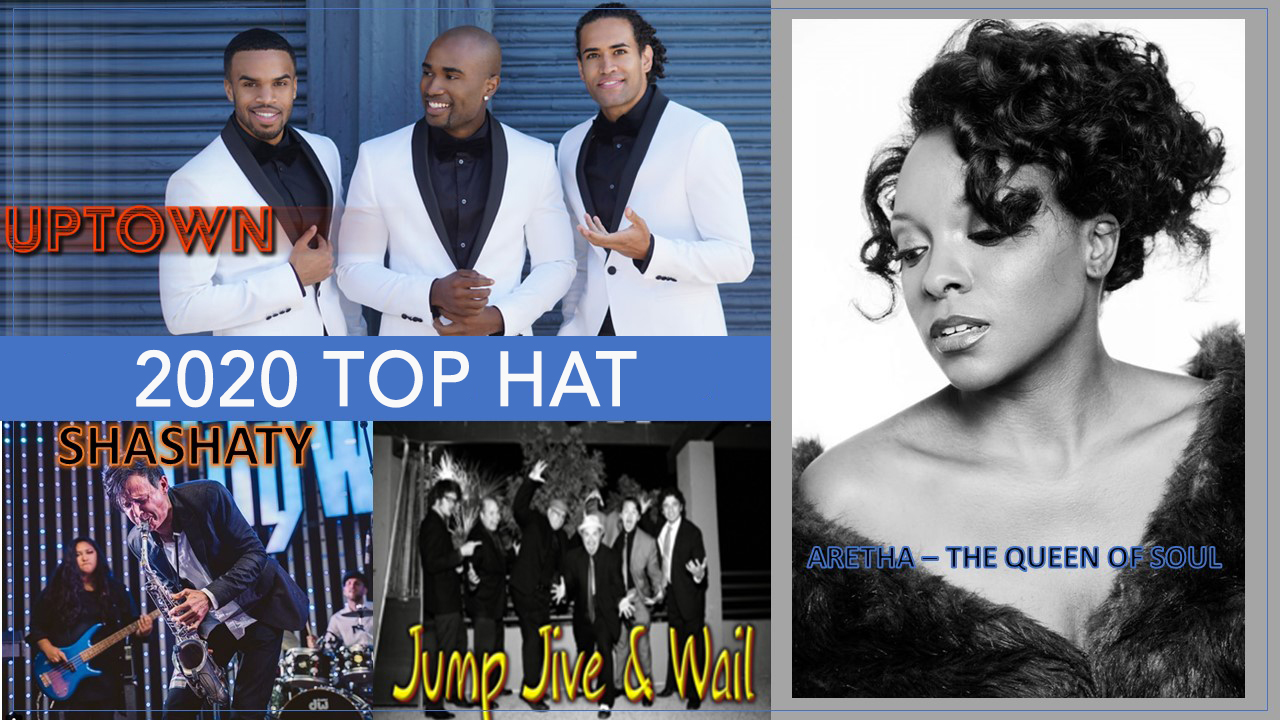 High-energy performances return to Sun City West in early 2020 with the 2020 Top Hat Series at the Palm Ridge Recreation Center. The four scheduled performers for the series will each provide two performances at 3 and 7 p.m. Doors open at 2:30 and 6:30 p.m. for each show.

Uptown is about to take you on a first-class trip through the melodies you love, with a fresh new feel that will leave you screaming for more. Straight out of New York City, the epicenter of soul and rhythm and blues, these young men will sing and dance their way into your hearts, and out of your seats in style. With the class of young Temptations, vocals like
Marvin Gaye and Stevie Wonder, and the contemporary feel of Bruno Mars.

“Brighter Day,” the title of ShaShaty’s first album of original material in more than 10 years says it all about this multi-talented saxophonist and composer’s excitement and optimism as he springboards into the next phase of his dynamic career. He started as the front man for an instrumental pop/rock band after high school before taking up jazz studies in college. But it was his blazing start in the thriving Miami and South Beach club scene that kicked off his career. The roar ShaShaty made at clubs like The Clevelander and Tropics soon led the saxophonist to opening gigs for pop legends like REO Speedwagon, The Bee Gees, and Gloria Estefan. Expanding his horizons, ShaShaty has now become one of the creators, producers and host of “Vineyard Jazz,” a music-centric travel and wine industry show taped at various wineries in California’s Napa Valley and Central Coast.

Jump, Jive & Wail has earned the reputation of being one of the finest jump-swing bands in the world. Formed in Las Vegas in 1998 by vocalist/trombonist Ken Levine, JJW was quickly playing some of the biggest showrooms in Las Vegas. Former member of Louis Prima, Jr.’s band, Ken had a dream of fronting his own group combining the music of such legends as Louis Prima and Louis Jordan, while adding in his own original work. Jump, Jive, & Wail has entertained crowds in New York, Los Angeles, Hong Kong, and nearly everywhere in between. The players themselves are internationally renowned and respected musicians, having expertise in just about every genre of music. What started off as a dream is quickly becoming a legend; and what used to be a few fans, now reaches thousands.

Aretha: The Queen of Soul

“All Hail the Queen!” Aretha Franklin’s iconic career spanned six decades, influencing generations of aspiring musicians and vocalists. In her life, she recorded countless classics, garnered 18 Grammy awards, The Presidential Medal of Freedom, and earned the No. 1 spot as Rolling Stone Magazine’s list of the Greatest Singers of All Time. The show stars the immensely talented
Charity Lockhart, accompanied by spectacular vocalists and musicians as they celebrate the legendary life and music of Aretha Franklin!